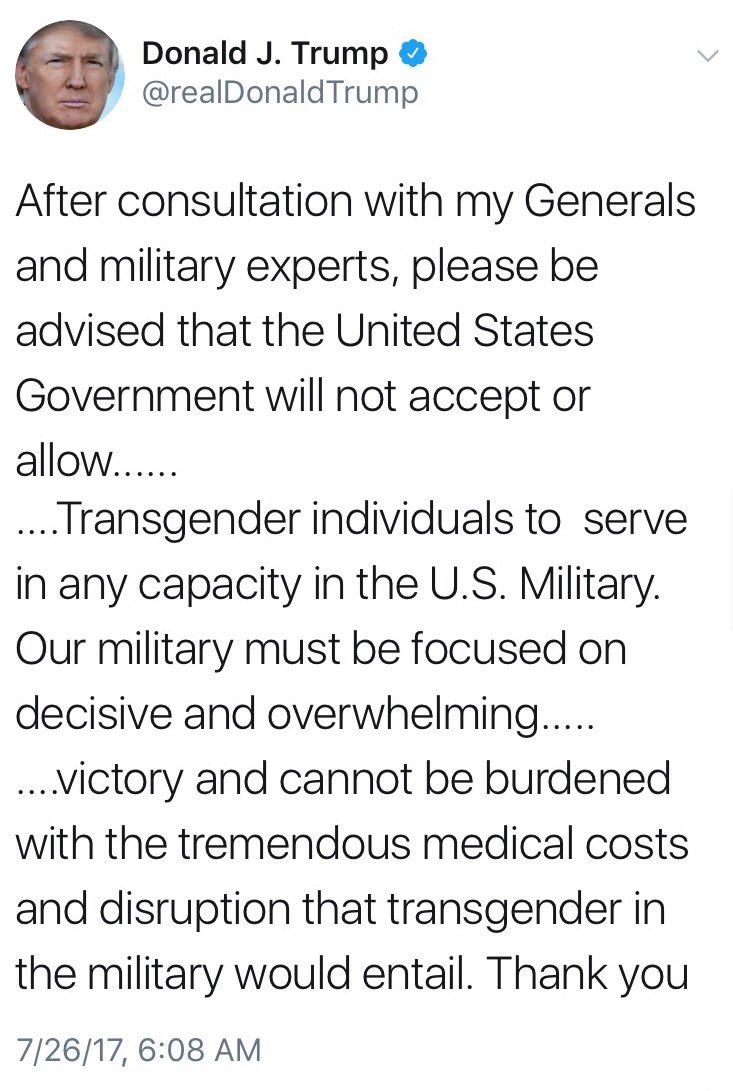 This is the New America we woke up to today. As of 6:08 AM, Eastern Time, on this day, July 26, 2017, the United States of America has forfeited its ongoing advancement towards human equality. The very White House, President of the United States of America, has not just undermined the great leaps forward we have made in our society towards freedom for all people, but demolished what took decades to achieve.

If you think because you are not transgender that this will not affect you, think again. With such brazen discrimination openly endorsed and enforced, it will not stop here. Women have only recently gained the right to hold all positions within the military, with their right and responsibility to become an equal part of the draft still being processed. That could likely be curtailed. Let me explain why, real quick, it is important for women to be a part of the draft. Equality. Women will always be treated as “cared for” so long as they are not given equal responsibility. And, well, ‘cared for’ is just another way of saying subservient, less than, incapable of, etc.. Get it? Attacking transgender is just the first step. Once you start down that xenophobic road, it becomes easier to discriminate openly, and even legally. Once any of our citizens are less than equal, no one is equal.

The excuse here is ridiculous. I am not sure exactly how a transgender individual has, “tremendous medical costs.”

Make no mistake, if we say they are a disruption and somehow unfit to serve, the next step will be Gay Americans, then women, then, perhaps, Muslims, Jews… And no, this is not like the Don’t Ask, Don’t Tell Policy. This is much further. Don’t As Don’t Tell, while awful, was a step towards LGBT service. This will make it illegal for transgenders to serve in the military, openly or otherwise. This is yet another ban.

Since Trump can’t seem to get his Muslim Ban off the tarmac, he has decided to start banning citizens instead.

There is no legitimate excuse for banning able bodied citizens from serving in our military. This is nothing other than legalizing discrimination and empowering the White Supremacists which he too readily serves.

Rise up. Resist. An attack on our LGBT community is an attack on us all. An attack on the freedom of our citizens, people who love this country far more than the traitors in the White House, cannot be allowed. Make no mistake, this is an egregious distraction Trump has formulated to deter people from his Russian investigation. But let us prove more than his equal. (not a difficult feat for anyone with a few active brain cells, an ounce of compassion and any sense of patriotic duty whatsoever) We can challenge this hateful action against our LGBT community. We can continue to fight them on healthcare. And we can continue pressuring this administration and demanding justice for their treason. We are the people. We are the mob, the angry masses, who will not accept a ruler in the stead of a leader.

We are One Woman, One World